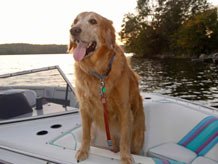 Dogs are generally a go-every where pet, so it’s not surprising to see them boating, enjoying a great summer day with their best human pals. What could be better to a dog than being aboard a boat with the wind blowing in his face, bringing scads of scents into his fine-tuned nostrils, playing king of the world as he guards his vessel? Then when the air starts to swelter, the crew pulls the boat into a cove for a refreshing dive and dog paddle in the cool water. Doggie heaven!
Cats, on the other paw, you wouldn’t think of as being the boating type. Cats generally detest travel and hate water. Yet, cats have a century’s old tradition of sailing the seas, keeping the rat and mice populations under control. Some people who love both cats and cruising have found that the two can mix quite well. What could be better to a cat than to lounge in the sun on a boat she has marked as her own, being admired by all?
Dogs boat on the lake, cats cruise the ocean
Dogs and cats can make excellent companions aboard boats. A dog is generally better suited for shorter adventures, such as a day on the lake or a weekend outing. Cats are generally better suited for extended travel, cruising the ocean. Why? Dogs tend to adapt to new environments more readily. But, until you train a dog to “go” on board, you’ll have to bring your boat to land a few times a day to allow your dog to relieve himself. Cats are less likely to enjoy a new environment, much less the car ride to get there. However, once a cat is on board a boat, and acclimates herself to the environment, she can be happy there indefinitely. And, she’ll use a litter box just like at home.